In continuation of the Kingdom’s efforts to protect and enforce intellectual property rights, the Saudi Authority for Intellectual Property, in cooperation with General Security, has launched inspection campaigns targeting a number of regions of the Kingdom with the aim of controlling commercial stores that violate intellectual property rights regulations. 11620 articles violating creative rights were seized, including electronics, computer programs, sound recordings, and printed works (student services) during the month of January 2021. 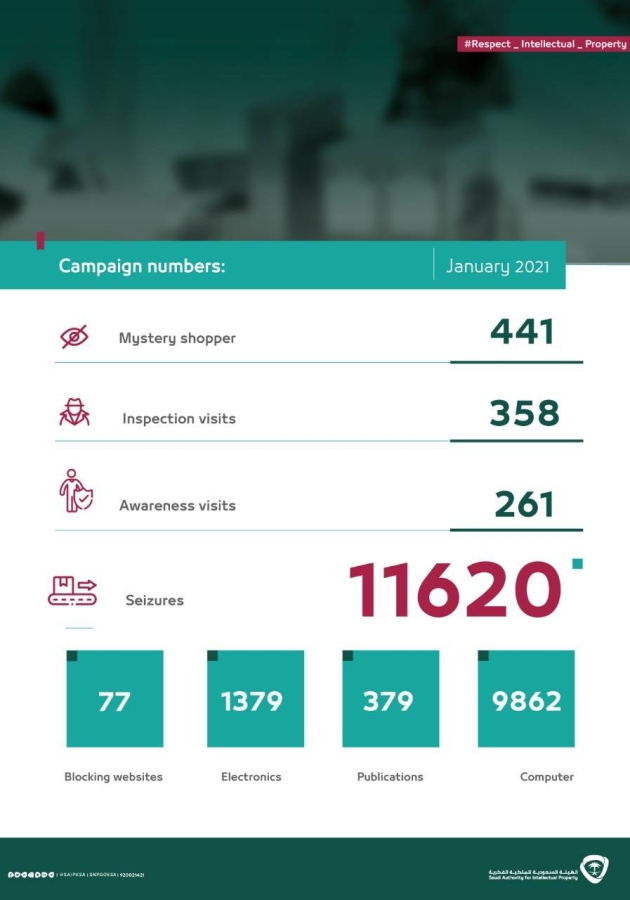 The campaign was launched by conducting preliminary surveys by conducting more than 440 visits from the mystery shopper to the targeted areas, and establishments that violate intellectual property rights and works that are prohibited to be sold or exploited in any way were identified in accordance with the laws and regulations in force in the Kingdom

In the same context, SAIP has launched a parallel campaign aimed at inspecting websites to verify the extent of their compliance with intellectual property systems and not violating rights , and it has taken legal measures against violating websites that amount to blocking those sites. As a result of this campaign, more than 355 websites were visited, of which 77 were proven to violate intellectual property systems, and accordingly these sites were blocked.

The campaign came as an extension of the periodic field trips carried out by intellectual property inspectors on commercial establishments that use in carrying out their activities any of the intellectual works, to combat the violation of those rights and to control the performance of service providers for goods related to intellectual property rights, by means of continuous awareness-raising, inspection campaigns, knowledge of violators and the imposition of punishments due against them, in cooperation with partners from the government and private sectors in the Kingdom.

SAIP stressed that it will not be negligent in taking the necessary measures to penalize violators of the regulations in all areas in which SAIP is concerned with taking care of its rights, and called on citizens and residents to support efforts to respect intellectual property by communicating with SAIP official channels through social media @saipksa , e-mail Saip @Saip.gov.sa and the direct customer service number 920021421.

No comments to show.